Posted on December 15, 2016 by frugalchariot

The winter solstice is next week; Christmas is ten days away; thus commenseth the happiest time of the year for a certain percentage of Homo sapiens along with various other attached critters — save for the various species of spruce and/or pine trees, of course. Here’s what we know for sure; Santa comes soon: YAY! Trump is already here: ICK! What’s it all mean?

Reasons that some are joyful:

End Times Pastor: Donald Trump Could Be The Messiah Or His Forerunner!

Michael Medved: God Hid All The Gold In California Until It Became The Property Of The United States!

Liberty Counsel Warns That Religious Leaders Might Soon Be Beaten To Death For Celebrating Christmas!

Then there’s this, explains why some (of us) are NOT all that joyful: 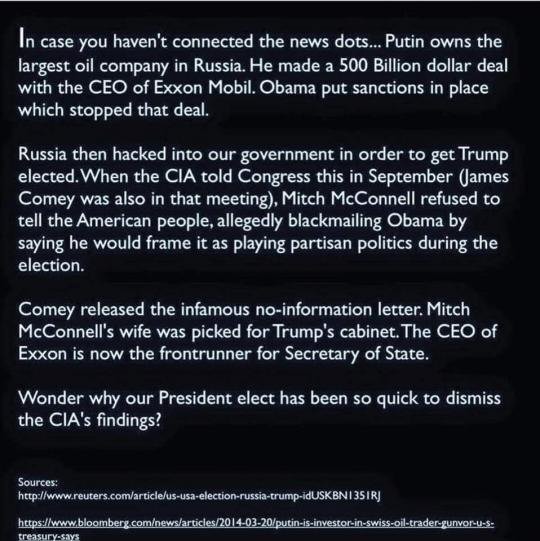 Really? Isn’t there a word for that sort of thing?

Ouch. Maybe the word “Happy” shouldn’t be used in front of “Holidays” this year? Also, is “Merry” in front of “Christmas” really appropriate?

Reminds me of something I read somewhere once. Oh, yeah; this:

Article III. Section 3. Clause 1.
Treason against the United States, shall consist only in levying War against them, or in adhering to their Enemies, giving them Aid and Comfort.

Treason. Really? Could any politician ever do that just because s/he’s a “loyal” Republican? Maybe, I suppose, esp. if it helps keep a Democrat out of the White House. Or maybe it might help Exxon and Russia get together and make lots of fresh cash by milking the Arctic oil cow.

OK, so let me guess their arguments: (1) Russia is NOT our enemy, (2) Putin is our FRIEND, and (3) thanks to Putin and Russia, REPUBLICANS CONTROL THE EXECUTIVE, LEGISLATIVE, AND SHORTLY THE JUDICIAL BRANCHES!  YEEHAW! MONEY MONEY MONEY BY THE POUND, AND POW-POW-POWER TOO! So there you are: Putin, our friend, DESERVES “Aid and Comfort”!

Brings to mind that old circa 1600 epigram by Sir John Harington:

Why if it prosper, none dare call it treason.”

Yes, that would work as a really groovy Republican argument. (I should point out, bye the bye, that John Harington was the brilliant Brit who invented the flush toilet, a concept that seems uncannily prescient these days whenever the discussion moves into the political realm.)

Well, whatever. The bottom line is that way too many 2016 American voters either couldn’t find their butt in a well-lit room with both hands, or they’re uneducated/mentally disabled/brain dead/stupid. Personally, I’d say ‘all of the above,’ but I suppose I could be off by a percentage point or two, maybe three.

In any case, I’ve about given up. I know I’m a relatively young dude at age 74, but I have to say — out loud — that this, my 74th Holiday  Season is, by any measurement I can imagine, the pits; it’s the worst the world has appeared during all but the first three years of my life (which I, of course, have no memory from which to draw). But the Second World War ended on September 2, 1945, some six or seven weeks before my third birthday. Then sometime in 1946, maybe early ’47, my dad bought a brand new Hudson, and the thing I remember most about it is that its bumpers, front and rear, were made out of heavy wooden boards and not chrome-shiny steel — word was that it took awhile to retool some stuff in various factories, to turn them away from war stuff and instead make consumer/car stuff. Life was good, though. No more war.

In October of 1947, i was aging fast. I turned five years old, and on my birthday I got a brand new ELECTRIC TRAIN! WOW!

That’s me, the one sitting inside the train tracks loop. The one with the smile, the new sports coat and the really cool necktie. But neatest of all, the train!

A month or so later as Christmas 1947 approached, I was looking through a catalog my dad had gotten in the mail, and when I found the electric train part I spotted exactly the thing I wanted Santa to drop off on Christmas Eve: a Coal Loader!

Then in early December, we waited for a day when it wasn’t snowing and the roads were clear, and headed to Minneapolis in pop’s still-new-Hudson-with-the-wooden-bumpers. Once there, we went straight to Dayton’s downtown Department Store; timing was perfect — Santa was already there taking orders! I waited patiently in line; it was an opportunity I was NOT going to miss!

As you can immediately tell, this wasn’t one of those fake Santas you see all over the place, this was the REAL SANTA!! We chatted for a couple of minutes, then he asked me what I wanted for Christmas. My answer was a simple one: “I want a coal loader,” I said, “to put coal in my train.”

Santa said, “A coal loader to put coal in the train. And what else?”

“Umm, that’s about all,” I answered. Santa was impressed — REALLY impressed! I was pretty sure I’d done it the right way; I even sang for him a few lines from Jingle Bells, and as I walked back to my mom and dad, I was absolutely positive that come Christmas morning, there would be a coal loader under the tree. And I was right! And I was SO impressed with Santa, the REAL one on whose lap I’d sat, and I have to say I remain impressed through this very day!

The bottom line in all of that remains a simple one: I learned, 69 years ago right about this time of year, how to decide if what you see and what you are REAL or not. And so, thanks to that expertise I mastered all those years ago I can say, today, without hesitation that:

President-(s)elect Trump is a PHONY!

Don’t believe a single word the bum ever speaks.

For that matter, only the fool or the tool will ever believe anything ANY Republican says or tries to write down (Tweet, in today’s vernacular); three dollar bills are, in fact, far less phony than most any Republican you will ever meet or come to know. And so I have, this year, finally, a Christmas wish that’s even bigger than the one from 69 years ago. It’s a simple one: IF the system actually allows Trump to be inaugurated and become the 45th POTUS — in spite of the fact that he lost the popular vote by nearly THREE MILLION VOTES — then, Santa, PLEASE! PLEASE GET ME THE HELL OUTTA HERE! Either that or “Make America Great Again” by giving Herr Trump a non-stop one-way ticket straight to Russia, and reunite him there with his one true love!

Merry Christmas to all, and to all a good night.

How Frugal is the Chariot That bears the Human soul. (Emily Dickinson)
View all posts by frugalchariot →
This entry was posted in Election 2016, Essays, Photos, Politics, Uncategorized. Bookmark the permalink.