Dawn Breaks Over Hanalei Bay on the North Shore of Kauai, Hawaiian Islands.

There are days during these troubled and irrational times when the overwhelming urge is to ignore the moment, to instead ponder other potential options that human existence might — maybe? please? — pursue or (at least) offer: something beyond those politically-inspired nonsensicals embraced within all of current discourse as if by mucoidal slag. Today is one of those days; the world’s global and human-inspired destructive political and dogmatic silliness and downright stupidity demand an alternative view. No politics, no dogmas, no destructions, no desolations are permitted. Not today. Instead, I wondered: why not a reflection of certain ‘lessons’ I have (accidentally to be sure) been fortunate enough to encounter over the last nearly four decades, ‘lessons’ which finally want to gel, to become ideas, maybe even concepts of that which life offers, what it “means”?

OK. So off we go. Back to the source (for me, at least), to Polynesia, to the Hawaiian islands of Oahu, Hawaii, Maui, Molokai, and especially Kauai — via old photos, via an old poem, and via a recollection or two gathered in a Buddhist Garden . . . overall, an excursion, really, onto The Sea of life’s potential, its “meaning” — the undercurrent of the entire planet’s divine spirit, its Namasté . . . at least as seen through my own admittedly dimmed and foggy vision.

It begins with the obvious:

Kauai’s Na Pali Coast and the Pacific beyond, viewed from the slopes of Mt. Waialeale overlooking Kalalau Valley.

And here and there soft sunlight’s tinted hues
Suggest life’s calm abode – which, with cold arms

Yet on her shores, in frenzied battery,
Great waves disintegrate with energies

And broken swells, like shattered crystals, fly,
Then fall and quickly wash the sands, with masked

Byodo-In, Oahu’s Buddhist Shrine in the Valley of the Temples –

A few decades ago, I visited a special place in the Hawaiian Islands, on Windward Oahu. As the crow flies, it wasn’t far from the geographically-confined sprawl of late 20th century Honolulu, but in every other way it definitely stood a world apart.  It’s called the Valley of the Temples, and its beautiful centerpiece is a Buddhist shrine called Byodo-In, a replica of a 900-year-old Buddhist temple in Uji, Japan. 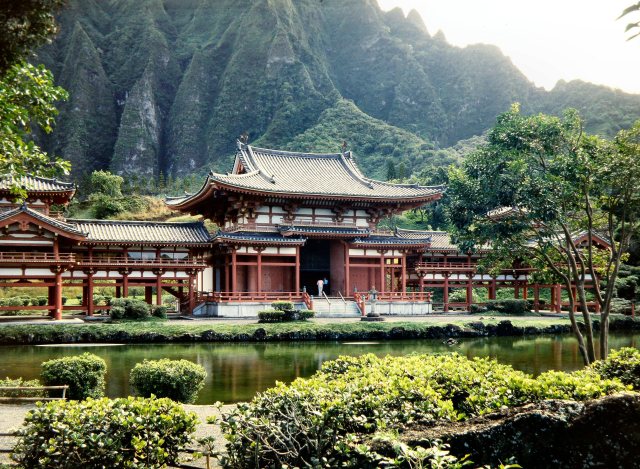 Arrival is ordinary; there’s the parking lot, of course, generally a small crowd coming and going, and a paved pathway into the grounds.  The scenery is impressive and eye-catching; with the fluted cliffs of the Nuuanu Pali as a backdrop, the frequent rain clouds, rainbows, and salubrious tradewinds combine to effect a very nearly idyllic rendition of an ideal tropical scene.  But once on the grounds (which are spacious and open, but still private and lush) a feeling of ‘something’ seems to gradually overcome the senses.  There are clear meandering streams, ponds of lily pads where huge gold and multi-colored Koi swim . . .

and beyond which sprawl ‘minimalist’ gardens where tropical flowers are amazingly pervasive.

Here and there a graceful footbridge arches over a stream; there are rock gardens, and occasionally in a small corner an unobtrusive bench upon which one can sit for a spell, often in the midst of intensely fragrant flowering shrubs and/or next to a gurgling stream.  After a short while, one slowly becomes aware that things are different. Somehow. There is no ‘un-natural’ noise. One senses that he is, indeed, “Far from the madding crowd’s ignoble strife” as even the occasional stray voice seems muffled, barely audible.  Everything one sees or senses is perfectly placed, perfectly manicured, but nothing looks either disturbed or out of place, or even pruned or planned; it all seems and ‘feels’ completely natural in every way.  After awhile, even the temple itself – the centerpiece of the gardens – seems as if it has grown from the ground naturally, not as if it’s been constructed by humans.

I suppose I wandered there for at least a couple of hours before leaving, soon to re-enter Honolulu-bound traffic on the Likelike Highway.  I puzzled the entire trip back to ‘civilization’ but was unable to quite figure out – to put into words – just exactly what it was that I had just experienced at Byodo-In, and it wasn’t until several weeks later that it finally struck me: I had spent two hours of my life in Oahu’s Valley of the Temples, and become thereby as if an intricate part of a giant artwork.  In the metaphoric sense, the experience probably most resembled a visit to an art museum, perhaps even to a symphony concert in a renowned hall somewhere, but with one huge difference: at Byodo-In, I, the visitor, was intended, prearranged, to become part and parcel OF the artwork – a brushstroke in the Mona Lisa? a note in a Mozart symphony? – but surely not, any longer,  just an observer.  I wasn’t listening to a Beethoven sonata, I was, rather, now parcel to the score of a Beethoven sonata, and the melody implicit had subtly emerged to define my entire surround!

It’s begun to seem, to me at least, that art has many levels and it really doesn’t matter just how – or precisely where – one fits himself in; the important thing is to do so, to open the mind and allow the transition, the transcendence.  The only superlative to gazing at an artwork may well be to exist as part of it, to be surrounded by and intrinsic within whatever it is that sets the work apart from the ordinary, that which makes viewing it an experience and not just a minor event.  And therein lies the virtue of art — no matter whether the form be painting, sculpture, music, words, even an ocean sunrise. Whether natural or of human creation, all of art requires only the substance of intrinsic quality, that sum of esoteric value as expressed in one form, or another.

Perhaps that’s the point where one’s sense of existence blends with and becomes an intricate part of that far greater sum which some choose to call the Universe, the Creation – or any of a number of all-embracing ideas which emerge to define the transcendent breadth of one’s own life. And that “simple” idea is what I like to think I’ve finally come to comprehend; IT is (intensely, on occasion) implicit in the compilation of words and graphic renderings of isolated partitions of each and every place on this planet that I’ve visited over the years, and in that context IT is, in reality, nothing I might have ever brought to THEM, but what THEY have CONSISTENTLY! given to ME.

My hope is singular – that each and all might learn to seize one of THOSE moments, every now and then — a moment which allows the escape from current reality to become even the briefest of brush strokes in the art of whichever natural paradise might be at hand.  Exist there for a moment or for a lifetime – become a word in a poem or become a poem; become a note in a piano concerto or become the keyboard, the score; close your mind to the intrusions of man, and shield your eyes from man’s desecrations of the land, the sea and the sky.  Relax, become part of that which you truly are, and disavow that which you are not or should never become.

And, later, when you return to the reality of the modern world, recall from whence you’ve come; engage yourself in the fight to save that small part which remains undisturbed, to repair all which is repairable of that which has been desecrated or destroyed. And then – rejoin the beauty from which you and all of life and form have once derived.

Waimea Canyon, aka “The Grand Canyon of the Pacific”; Kauai

I’ve never since viewed art in the same way as I once did, nor have I ever since been able to immerse myself into an undisturbed natural expanse and not become, once again, an intricate part of each the reality AND its attendant metaphor(s). The distinctions between brush strokes, or pigments, or shapes, forms, even words in a poem or notes in a melody fade to the point where I am no longer a separate entity, but am instead part of that Song.

William Wordsworth summed it all up in his poem Ode on Intimations of Immortality:

No more shall grief of mine the season wrong;
I hear the Echoes through the mountains throng,
The Winds come to me from the fields of sleep . . .

Ye blesse`d Creatures, I have heard the call
Ye to each other make; I see
The heavens laugh with you in your jubilee;
My heart is at your festival,
My head hath its coronal,
The fulness of your bliss, I feel–I feel it all.

Oh evil day! if I were sullen
While the Earth herself is adorning
This sweet May-morning,
And the Children are culling
On every side,
In a thousand valleys far and wide,
Fresh flowers; while the sun shines warm,
And the Babe leaps up on his Mother’s arm:–
I hear, I hear, with joy I hear!

Note what is missing in the scene just above: each and every evidence of human’s Politics, of his Greed, Power, of his perceived “Dominion” (in any sense, Biblical included), also Conquest, Authority, Money (whatever THAT is supposed to be), Dogmatic Usurpation, Pollution of Essence . . . none of that. But yet, there stands a human. How can that be?

It’s because HE stands there on that sunrise-emblazoned shore as if a note in that symphony, a word in that poem, a single brush stroke in that painting . . . and deep within, he knows he is but a PART of that universe in which he stands, HIS universe, OUR universe. He knows full well he does not own it, that he has no dominion; all he knows is that HE is parcel to it . . . and that HE is every bit as integral to its music . . . as is every aspect of his entire surround.

To him, and to all like him, I borrow from the Byodo-In, from the lingua franca implicit within The Valley of the Temples, one word:

How Frugal is the Chariot That bears the Human soul. (Emily Dickinson)
View all posts by frugalchariot →
This entry was posted in Photo Essays, Polynesia. Bookmark the permalink.